I spent the weekend going back and forth through Germany by train and this triggered the question above.

The journey started with issues and ended with issues. Germany’s Deutsche Bahn has some problems at the moment with their high-speed trains so eventually they don’t have enough coaches from the trains. But somehow the can not manage this in their reservation system and customer service, so people who have made a seat reservation – and paid extra for that – are left with their seat not available. 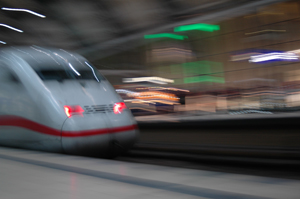 On the first part this caused our train to be delayed, so we missed our connecting train. So we had to take a later train, which itself had some technical problems and was again delayed.

On our way back we were ourselves victim to a “disappearing coach” so our reserved seat was just not there. And while I have to admit that the conductor managed the situation very professionally and we were lucky to get some alternative seat, it nevertheless left me with the question about simple service improvements.

I had ordered the tickets via the Internet so they could have known my reservation and email address and I assume that the decision that 6 coaches are not available is not something decided on the spot, but known some time in advance.

So why not send an email with a new reservation, so I would not even have to go through the hassle of trying to find a non-existent seat?  Why not create new reservations and give printouts with the mapping to the conductors and service people on the platform with some announcement that people could get their new seats from them?

I assume that this is not a logistics “super-problem” as airlines manage seat assignments and changes everyday. They can even send me a SMS when my flight is delayed.

Another issue that struck me was, when our connecting train had technical problems and the conductor made an announcement. Apparently he thought if he would speak as quietly as possible no one would notice the delay. But exactly the opposite happened. Everybody in the train was even more annoyed, because on top of the delay we could not understand the announcement and therefore didn’t know what was going on.

So again I would think a simple thing to improve customer service. Just be as transparent and audible as possible on what the status is. Any delay will be annoying to travelers, but having to guess about the status will make it even worse or to the opposite – also reflecting Jeff Jarvis’ experience here –  openess will improve the situation.